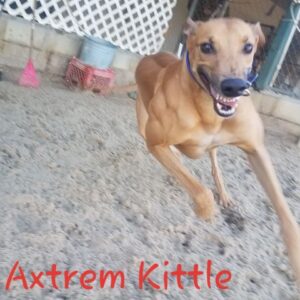 Born 11/19/18. So she is 2½. She is already spayed, she will get vaccine updates and microchip from Dr Carter in April! She does well on the tile and wood floors. We learned that she can jump a 4 foot fence, which she did at her foster home, to chase after a small morkie dog. So the adopter’s fence needs to be taller than 4 feet. 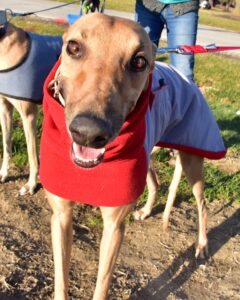 Kittle is littermate to Kelsey (Axtrem Kelce) who was adopted after arriving on the January haul. Kittle raced a little longer than her sister so she retired later, arriving on our March 20 haul. Cat workable.